Dior’s haute couture approach to watchmaking involves a unique blend of innovative technology and hand finishing that is comparable to the maison’s expertise in creating couture fashions. For example, the Dior VIII Grand Bal collection contains the brand’s innovative proprietary Inversé movement with the rotor — the oscillating weight that winds the mainspring — on the dial, rather than the caseback, for the sole purpose of decorating it. Dior has set the rotor with diamonds, gemstones, mother-of-pearl and even feathers.

The rotor on the newest Dior VIII collection, the Grand Bal Fil de Soie, is woven with silk threads that are ‘hemmed’ with diamonds. Dior engaged traditional lace makers from the Le Puy-en-Velay region of France, the cradle of lace-making in that country since the 16th century. Tools were created specifically for working on these dials. The result is a spectacular, symbolic rendition of a Dior ball gown in miniature — as the rotor swings back and forth with the movement of the wrist, it resembles the sway of a skirt. The case is made of high-tech black ceramic and 18k pink gold. In another stroke of creativity, the rotor of the Dior VIII Grand Bal Plissé Soleil is set with overlapping sections of delicately inlaid mother-of-pearl. The Dior VIII takes its name from the street address of the historical townhouse where Christian Dior set up his atelier in Paris in 1946.

Also among this year’s new collections is the Grand Soir Origami, with 3D dials designed using mother-of-pearl marquetry to resemble origami, the Japanese art of paper folding. The angular surface of the dial is punctuated with unusual gems and cuts, including helix-cut and trapezium-cut diamonds, and triangle-cut spinels, aquamarines, pink sapphires and tsavorite garnets. Dior was one of the first to include top- tier mechanical calibers in ladies’ timepieces, and each of the five unique pieces in this collection contains the Elite Caliber mechanical movement made by Zenith, which like Dior is part of the LVMH Group.

Dior also introduced several stainless steel and steel/gold watches this year in the Dior VIII Montaigne collection. Gray is an important color for Dior, who grew up in Normandy, where the sky was often composed in shades of that color, which is incorporated into his collections. There are three case sizes to choose from — 25mm, 32mm and 36mm — in steel, steel/gold and gold. The dials are set with mother-of-pearl or tinted with translucent lacquer in pink — which Dior called “the sweetest of all the colors” — or blue, with a central ring set with diamonds. The bezel is also set with diamonds. The bracelet is polished stainless steel with the collection’s signature pyramid-shaped links, and there is a steel and gold option in this collection for the first time this year. They contain either quartz or automatic movements, with rotors on the automatics lacquered and visible through the asebacks — like the embroidered lining of a couture dress, the final finish is hidden when the watch is worn, the true mark of luxury. 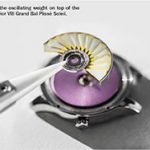