The adventure began with René Bannwart. With his strong entrepreneurial spirit and watchmaking experience acquired from the most prestigious watch manufacturers, he founded his own brand and created Corum in 1955 with his uncle Gaston Ries.

The emblem, a key pointing skywards, is a symbol of the enigma to be resolved, of new territories to be explored, and of innovation.

Since its inception, Corum has shaken up the traditional and conventional codes of the high watchmaking by creating models like Golden Tube, Chinese Hat, Coin Watch, Romvlvs, Rolls Royce Watch and the famous Admiral’s Cup and Golden Bridge. This year, the watch brand based in La Chaux-de-Fonds, has decided to reinterpret some of its iconic models, launching a new version of the Ingot Watch and Feather Watch.

Acknowledged both for the aesthetic appeal of its models and for its technical excellence, Corum is proud to contribute to perpetuating the time-honored values and expertise of fine watchmaking, and to propel them firmly towards the future by creating tomorrow’s watchmaking today. Corum has adopted creativity, consistency and long-term vision as its guiding principles. 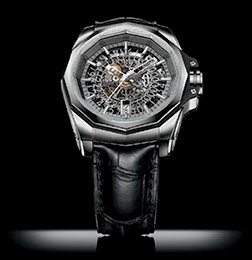 Like a burning fire born of an alliance between gold and titanium, the legendary Golden Bridge Automatic from Corum appears in a whole new light. Contrasts, transparency and an exceptional mechanism combine in this new interpretation of an iconic contemporary Haute Horlogerie model. Beating steadily at its heart is the spectacular and exclusive Corum CO313 caliber with its linear oscillating weight, set off to its best advantage by the metallized sapphire dial. Or what happens when history meets the future.