Chopard Revs up Its Racing Collections

Chopard co-president Karl-Friedrich Scheufele’s passion for classic racing automobiles has had a profound influence on the company’s involvement in the auto world and on its watch collections. It began with the Mille Miglia, a 1,000-mile race from Brescia to Rome through some of Italy’s most breathtaking scenery. The Scheufele family, including Karl-Friedrich and his father, Karl, has participated in the Mille Miglia since 1987, and has been a sponsor since 1988. Of course, the company has also made a limited edition timepiece each year to commemorate the race. This year’s Mille Miglia is a chronograph with vintage details that pays tribute to the historical cars taking part in this classic car race. The Mille Miglia 2014 limited-edition watch carries a more distinctly Italian flavor than its predecessors, with its red tachometric scale and hands, white dial and green minute circle — the colors of the nation’s flag. It also pays tribute to the oldest cars taking part in the race, those dating from the 1920s and 1930s, with a numeral font from that era and an overstitched Barenia calfskin strap reminiscent of the bonnet straps on the most venerable participants in the race. It is equipped with a self-winding chronograph movement in a stainless steel or 18k rose gold case. 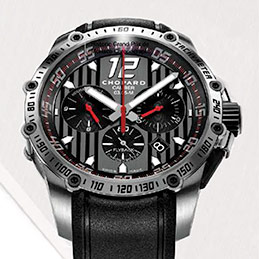 Since 2002, Chopard has also been a sponsor of the Historic Grand Prix de Monaco, which involves vintage racing cars dating from the 1920s to 1985. Karl-Friedrich Scheufele is a keen aficionado of historical cars, and for each edition of this race, held every two years, Chopard has presented a limited-edition chronograph. In 2014 and for the very first time, Chopard is launching a full-fledged collection related to this race. The new collection of Grand Prix de Monaco Historique watches is composed of three precision instruments intended to support drivers. They include the Chrono, the Automatic and the Power Control. The Automatic is COSC certified and has a self-winding movement. The Power Control has a power-reserve indicator placed at 6 o’clock, with a design that is directly inspired by fuel gauges. The Chrono features hour and minute totalizers, a small seconds and a central chronograph seconds hand, driven by an automatic movement. All are set in bead-blasted titanium cases, which are extremely lightweight and hard. It comes in various versions, including rose gold, steel and titanium versions. 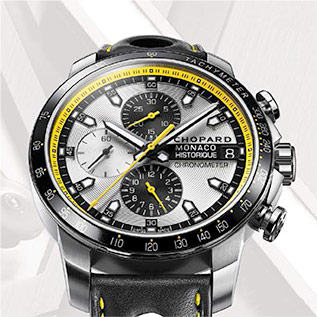 The timepieces in Chopard’s Classic Racing Collection are equipped with Chopard movements that are designed, developed and assembled in the company’s Fleurier Ebauches workshops. The Superfast Chrono houses Caliber 03.05-M, a mechanical self-winding chronograph movement. The Superfast Automatic is equipped with self-winding Chopard Caliber 01.01-M, displaying hours, minutes and seconds. The Superfast Power Control houses caliber 01.02-M, with hours, minutes, small seconds, date window and a power-reserve indicator. All are COSC certified and designed with a racing car aesthetic, with vertical lines on the dial that evoke the cooling fins found on air-cooled racing engines and numerals that resemble the markers on sports-car rev-counters and speedometers.