Pilots have been relying on Breitling’s navigational intruments for the wrist since 1915, when the brand introduced its first chronograph wrist- watch. The Swiss watchmaker patented its signature circular slide rule on a wristwatch in 1941. This clever instrument made it possible to convert speeds or distances from one unit of measurement to another. These watches were the forerunners of the legendary Breitling Navitimer, the brand’s flagship aviator’s watch. 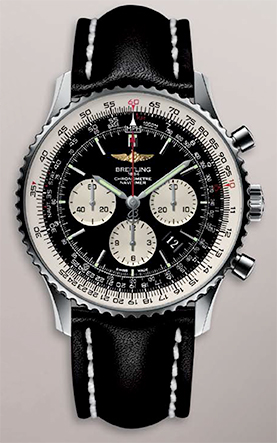 The first Breitling Navitimer was introduced in 1952, and was purpose-built for pilots. It was equipped with a circular slide rule and a chronograph function, and capable of handling all calculations relating to airborne navigation, including division, multiplication, the calculation of averages and fuel consumption.

The Navitimer has been in continuous production now for over 60 years, and is considered one of the most iconic watches in the world, always included in the top-ten lists of all-time classics. This year, Breitling introduces three new models. First, a reinterpretation of the classic model in a larger diameter, another with a dual time function and a limited edition with a spectacular bronze dial. All are equipped with high-performance chronometer-certified manufacture Breitling mechanical movements.

The Navitimer 46mm is an extra large version that not only enhances readability but emphasizes the iconic black dial, made using the brand’s proprietary “épargne” technique, which gives it a radiant finish. The 46mm model is also available with a blue dial. In 2009, Breitling introduced its own manufacture movement, developed and produced entirely in-house. This self-winding chronograph movement, the Caliber 01, is now used in the Navitimer collection. It is an official chronometer, which means it has been rated to the highest accuracy and reliability standards set by the Swiss Official Chronometer Testing Institute. The movement can be seen through the transparent caseback. In addition to the steel version there is a 200-piece limited edition red gold version of the 46mm.

The second new Navitimer is a GMT, in an imposing 48mm case, that displays a second time zone in 24-hour mode. Home or reference time is indicated by a red arrow on the 24-hour scale on the inner bezel, while local time is displayed on the main dial. The movement is the Breitling Caliber B04, a chronometer rated automatic movement with a 70- hour power reserve. The watch also has a 1/4th of a second chronograph function, with 30-minute and 12-hour totalizers. In addition to the steel version, there is also a 200-piece limited edition GMT in red gold. Both feature Breitling’s signature circular slide rule.

The Navitimer also makes an appearance this year with a unique bronze dial. This 1,000-piece limited edition series is called the Navi- timer Panamerican, and contains the Breitling Caliber 01. Like the red gold editions of the 46mm and the GMT, it is sure to become a collector’s piece.